The Nigerian Super Eagles took a step in the right direction in redeeming their battered image by opening their Africa Cup of Nations (AFCON) qualifier with a win against the high-flying Leone Stars of Sierra Leone on June 9, 2022.

The match played at the MKO Abiola National Stadium in Abuja, Nigeria, ended 2-1 in favor of the Eagles, and it was played without fans due to the one-match FIFA ban following the mindless destruction that occurred after the men’s national team fell to Ghana during the 2022 FIFA World Cup playoff round earlier in March.

It had looked like the old demons were yet out to haunt the Eagles after Jonathan Morsay put the Leone Stars ahead with a superb diving header from a delicious cross from Alhassan Koroma.

Knowing that they couldn’t afford to repeat the same fruitless show they put up against the Ghanaians, the Eagles ramped up the pressure and were duly rewarded in the 16th minute of the game. A quick exchange of passes between Alex Iwobi and Moses Simon set the Everton man up before the opponents’ goal, and he made no mistake slotting into the far corner of the Leone Stars goal to draw the Eagles’ level.

Memories of the 4-4 draw in another AFCON qualifier played in Benin City, Nigeria, against these same opponents in November 2021 must have been on the minds of the Eagles as they grew into the match and threw everything but the stadium itself at their Sierra Leonean opponents.

The breakthrough and eventual winning goal weren’t to come till the 41st minute of the first half, though, but it was another well-taken goal by Victor Osimhen. The ball fell kindly to the Napoli hitman after Moses Simon again teed him up from an Ola Aina cross with a soft header, and Victor smashed the ball into the roof of the net for Nigeria’s second of the game.

There were several other chances to increase the goal margin for the Eagles in the second half. Still, wasteful finishing from Samuel Chukwueze, Joe Aribo, Ademola Lookman, and Osimhen himself meant that the scoreline remained at 2-1 till the game ended.

The Eagles will now travel to Morocco for their next match in the qualifying series against the “The Falcons and True Parrots” of São Tomé and Príncipe on June 13, 2022.

One major key point from this match is a growing need for the Nigerian team to stop showboating, wasting chances, and be more businesslike in front of goal; else, they may end up suffering another black day as they did against Ghana; due to lack of goals!

Their next opponents conceded 5 goals against Guinea Bissau, and the Eagles must now better or surpass that scoreline to claim the top spot in their group (Group A).

If they keep being wasteful like this, though, then Nigerians can only but pray that we don’t have a repeat of the Ghanaian episode with the Guineans for this AFCON ticket. 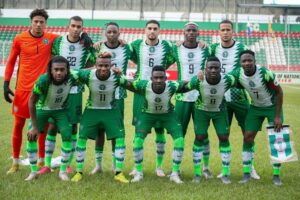