UPDATE: ASAP Rocky was Released From Jail After Meeting the $550K Bond Requirement.

ASAP, 33, had been arrested at the Los Angeles International Airport (LAX) on charges of assault with a deadly weapon on April 20, 2022, as he arrived back into the country from a vacation in Barbados with his girlfriend, Rihanna.

The rapper’s bail had reportedly been set at $550,000 after his arrest and the first arraignment before a court in LA a few hours afterward, and he has since been released after posting the required bond. 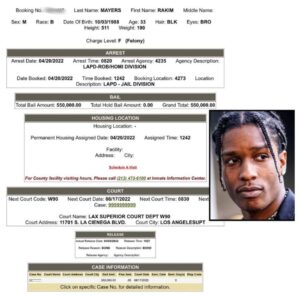 According to a statement released by the LAPD’s Robbery-Homicide Division detectives after his arrest, ASAP is alleged to have fired a handgun at an acquaintance on the street about three to four times before fleeing the scene with two other men. The attack reportedly left the victim with minor gunshot injuries.

As his arrest was going down at the LAX private wing, LAPD’s SWAT squad members were seen bursting into the rapper’s lavish LA home with a battering ram in a full-on assault on the property.

Fresh reports now indicate they were searching for the gun the rapper used in the alleged assault in November 2021. It is yet unknown if the crime weapon has been found at this time. 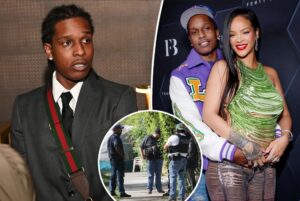 ASAP and his billionaire heartthrob, Robyn Rihanna Fenty NH, popularly known as Rihanna, are expecting their first child soon. The singer is reportedly far gone in her third trimester presently. She was also with him when he was arrested as they had returned from the holiday trip to her native country, Barbados, together.

According to the LAPD, ASAP and his team were blindsided by his arrest and the simultaneous raid on his house because they wanted to see if the gun he allegedly used in the shooting could be found, and they didn’t want to take any chances of him ditching the weapon due to being pre-informed about the arrest.

At least 10 LAPD and US Immigration and Customs Enforcement officers were reportedly waiting for the rapper when his private jet pulled up to the private LAX terminal. ASAP, Rihanna and their team were left shell-shocked at the incident and could only helplessly watch as police slammed their handcuffs on the rapper and led him away. 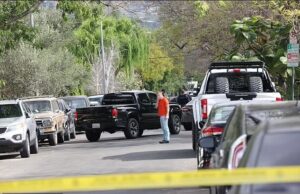 Yesterday, part of the LAPD’s confirmation statement read: “The argument escalated and resulted in the suspect firing a handgun at the victim. The victim sustained a minor injury from the incident and later sought medical treatment. Following the shooting, the suspect and two additional males fled the area on foot. Detectives worked diligently to investigate and corroborate the reporting information, which helped identify the suspect(s) involved.”

ASAP’s case has now been presented to the Los Angeles County District Attorney’s Office for filing consideration, and information about a trial date is now being expected.