by Mgbeke Media
in Uncategorized
39 2
0

Judge Ketanji Brown Jackson, President Joe Biden’s nominee to become the first Black woman on the U.S. Supreme Court, pledged independence if confirmed and embraced a limited role for jurists as a Senate panel on Monday opened a confirmation hearing in which her record came under Republican attack.

In her opening statement to the Senate Judiciary Committee, Jackson also noted that her parents grew up in the era of racial segregation in the South.

“My parents taught me that, unlike the many barriers that they had had to face growing up, my path was clearer, such that if I worked hard and believed in myself, in America I could do anything or be anything I wanted to be,” she said.

During opening statements, Democrats hailed the historic nature of her selection and praised her record as a federal appellate and district court judge. Republicans raised questions about her record – including a harsh attack by Senator Marsha Blackburn – and tried to link her to advocacy groups on the left while signaling they would try to paint Jackson as “soft on crime.” 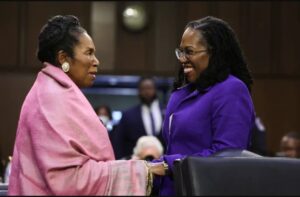 Biden, who as a candidate in 2020 pledged to appoint a Black woman to the court, last month nominated Jackson, 51, for a lifetime job on America’s top judicial body to succeed retiring liberal Justice Stephen Breyer, setting up a confirmation battle in the closely divided Senate.

“Members of this committee: If I am confirmed, I commit to you that I will work productively to support and defend the Constitution and the grand experiment of American democracy that has endured over these past 246 years,” Jackson said in her opening statement.
“I know that my role as a judge is a limited one – that the Constitution empowers me only to decide cases and controversies that are properly presented. And I know that my judicial role is further constrained by careful adherence to precedent,” Jackson said.

“I have been a judge for nearly a decade now, and I take that responsibility and my duty to be independent very seriously. I decide cases from a neutral posture. I evaluate the facts, and I interpret and apply the law to the facts of the case before me, without fear or favor, consistent with my judicial oath,” she added.

If confirmed, she would be the 116th justice to serve on the high court.

“Not a single justice has been a Black woman. You, Judge Jackson, can be the first,” said Senator Dick Durbin, the Democratic chairman of the committee.

“It’s not easy being the first. You have to be the best and in some ways the brightest. Your presence here today and your willingness to brave this process will give inspiration to millions of women who see themselves in you,” Durbin added. 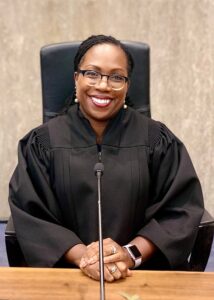 Durbin said attacks on Jackson’s approach to criminal justice issues are baseless and said her judicial record showed she would not be a “rubber stamp” for Biden. Durbin noted that law enforcement organizations including the Fraternal Order of Police have endorsed Jackson’s nomination.

“I hope that you will see how much I love our country and the Constitution, and the rights that make us free,” Jackson said.

As the hearing unfolded, Biden touted his nominee, writing on Twitter: “She’s a brilliant legal mind with the utmost character and integrity. I know she’ll make an exceptional justice.”

Some Republican senators promised civility, accusing Democrats of unfairly attacking Justice Brett Kavanaugh during his 2018 confirmation hearing after a college professor came forward to accuse him of sexual misconduct decades earlier, which he denied. But other Republicans attacked her.

“I can only wonder: what’s your hidden agenda?” asked Blackburn. “Is it to let violent criminals, cop killers, and child predators back to the streets?”

The committee’s top Republican, Senator Chuck Grassley, said Republicans “won’t try to turn this into a spectacle” and will treat Jackson with respect but will “ask tough questions about Judge Jackson’s judicial philosophy.”

Several Republicans sought to link Jackson to liberal groups that have supported her nomination and said they would ask her whether she supports efforts on the left to expand the Supreme Court as a way to erase its current 6-3 conservative majority.

Republican Senator Ted Cruz indicated he would ask about issues such as free speech, religious liberty, gun rights, abortion, and crime. Cruz sought to tie Jackson to Democratic efforts to reform the criminal justice system in the aftermath of the 2020 George Floyd killing in Minneapolis – efforts Republicans suggest are responsible for a rise in violent crime.

Senator Lindsey Graham, one of three Republicans who voted to confirm Jackson to her current position, signaled that his vote was not certain. Graham said Republican nominees have been asked tough questions by Democrats in prior confirmation hearings about their judicial philosophy but Republicans would be called racists if they do the same.

“It’s about ‘we’re all racists if we ask hard questions.’ That’s not gonna fly with us. We’re used to it by now,” Graham said.

Jackson faces questions from senators on Tuesday and Wednesday. Biden’s fellow Democrats narrowly control the Senate, which has the authority under the U.S. Constitution to confirm a president’s judicial appointments. 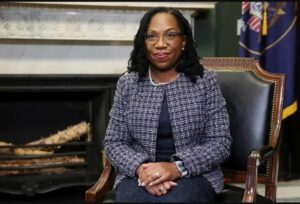 The Senate previously has confirmed Jackson to three federal posts including last year, when Biden nominated her to the U.S. Court of Appeals for the District of Columbia Circuit after eight years as a federal district judge in Washington.

Her confirmation would not change the ideological balance of the Supreme Court, which includes three conservative justices appointed by Biden’s Republican predecessor Donald Trump. But it would let Biden freshen the court’s liberal bloc with a justice young enough to serve for decades.

Jackson was raised in Miami and attended Harvard Law School, later serving as a Supreme Court clerk for Breyer.

If confirmed, she would be the third Black justice, following Clarence Thomas, appointed in 1991 and still serving, and Thurgood Marshall, who retired in 1991 and died in 1993.

Jackson would become the sixth woman to serve on the Supreme Court, which currently has three female justices.

A simple majority vote would be needed for Jackson’s confirmation, meaning she would get the job if all Democrats are united behind the nomination regardless of what Republicans do in a Senate divided 50-50 between the two parties.