Texas’s highest criminal court issued a ruling Monday to delay the execution of Melissa Lucio, the only Latina on the state’s death row who was set to be executed on Wednesday, April 27th, 2022.

The decision from the Texas Court of Criminal Appeals came as the state’s Board of Pardons and Paroles was also set to recommend to Gov. Greg Abbott whether to stay Lucio’s execution. A lower court can now review Lucio’s claims that her execution should be stopped based on new evidence that would clear her in the death of her 2-year-old daughter.

“I thank God for my life,” Lucio, 53, said in a statement issued by her lawyers.

She is one of six women on death row in the state; the last time Texas executed a woman was in 2014.

Lucio was sentenced to death 14 years ago in a capital murder case involving her daughter, Mariah. Prosecutors said at her trial that Lucio physically abused the toddler and that Mariah had bruises on her body, signs of a head injury, and an untreated broken arm when she died in February 2007.

Her legal team denied those claims and argued that prosecutors built their case around false medical evidence and a coerced confession following an hours-long interrogation with Texas Rangers. They said Lucio, who was sleep-deprived and pregnant with twins, asserted her innocence more than 100 times but was ignored.

Lucio’s lawyers have also said that she was susceptible to falsely claiming responsibility for the death because of her past experiences with physical abuse and sexual assault.

According to Lucio’s lawyers and supporters, Mariah’s death was accidental and she died after falling down a flight of outdoor stairs as the family was preparing to move to a new apartment. They said Mariah had a mild disability that caused her feet to be turned in and that the child was prone to falling.

On the day of the incident, Mariah was crying but did not seem to be seriously injured, Lucio’s lawyers have said. The girl died two days later.

Lucio’s supporters have called into question prosecutors’ initial investigation. At Lucio’s capital murder trial, then-Cameron County District Attorney Armando Villalobos described the statements she made to the Texas Rangers as a confession.

Six years later, Villalobos would be sentenced to 13 years in federal prison for his part in an unrelated bribery and extortion scheme.

The current district attorney of Cameron County, Luis Saenz, did not respond to a request for comment, but he had been under pressure from activists and Lucio’s family to withdraw the death warrant. During a contentious hearing with state House lawmakers on April 12, Saenz suggested he might halt the execution if the state did not intervene, but also said he had no legal reason to get involved.

The case has triggered strong reactions from celebrities, Texas lawmakers, and advocates. Reps. Joaquin Castro, Jeff Leach, and Joe Moody were among several congressmen who called for Gov. Greg Abbott and the state’s Board of Pardons and Paroles to grant an execution reprieve or commute her sentence.

Reality television star Kim Kardashian, who has become an outspoken criminal justice reform advocate, said in a tweet earlier this month that Lucio’s case had too many “unresolved questions” and her life should be spared. 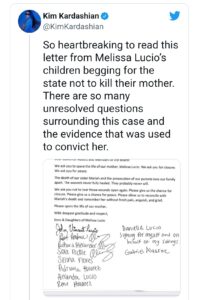 Many of Lucio’s supporters as well as some of her children held numerous protests across the state. As the pressure mounted for officials to step in, several jurors from the trial expressed doubts about her conviction.

One juror, Johnny Galvan Jr., said in a statement at the meeting with state House lawmakers that he believed Lucio’s lawyers failed to present pertinent evidence in her case and he felt pressured by other jurors to sentence her to death.

“I feel deep regret,” he said.

By: Minyvonne Burke and Erik Ortiz