by Mgbeke Media
in Mgbeke Special
37 2
1

The Ondo State Catholic Diocese has declared that it will be holding a funeral mass and mass burial for the victims of June 5, 2022’s terrorist attack on the St. Francis Catholic Church in Owa-luwa Street, Owo Local Government Area, Ondo State, Nigeria.

The program is scheduled for 9 am on Friday, June 17, 2022, and will be held at the church’s new cemetery at Otapete, Emure Road, in Owo, Ondo State.

Confirming the details of the proposed event to the media on June 13, 2022, the Director of Social Communication for the Ondo State Diocese, Rev. Fr. Augustine Ikwu, said: “The mass burial would take place at the new cemetery of the church on Friday in Owo.

As of today, the official number of the deceased remains at 40, while several injured victims are still receiving treatment at the Federal Medical Centre (FMC), Owo; the St. Louis Catholic Hospital in Owo, and some other private hospitals across Ondo State.”

Recall that the Ondo State Governor Rotimi Akeredolu had issued a directive for the Democracy Day celebrations to be canceled in the State yesterday, June 13, 2022, in honor of the memory of the dead victims.

Similarly, following a virtual meeting held by the South-West Governors on June 10, 2022, a 3-day mourning period has been declared across the region with effect from Monday, June 13, 2022.

According to reports, the governors who were present at the meeting and ratified the agreement were Governors Rotimi Akeredolu of Ondo State; Kayode Fayemi of Ekiti State; Dapo Abiodun of Ogun State; Gboyega Oyetola of Osun State; Seyi Makinde of Oyo State, and Babajide Sanwo-Olu of Lagos State. 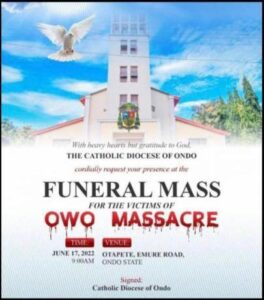 All flags in the South-West States are also directed to fly at half-mast during the mourning, as the governors collectively decide to be empathetic and responsible for their citizens.

This is a move that every sound reasoning Nigerian and persons all over the world would have expected the Buhari-led Federal Government to do with the Democracy Day celebrations on June 13, 2022.

But, alas, we all know how that went, don’t we? May the souls of the departed continue to rest in peace.