A certain Elvis Iroh and Christian Uwaezeoke have been arrested by the National Drug Law Enforcement Agency (NDLEA) on several counts of drug trafficking, drug abuse, and other charges. 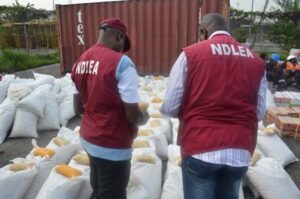 According to reports, both men were arrested at the Nnamdi Azikwe International Airport, Abuja, Nigeria, as they recently came into the country via an Ethiopian Airlines flight from Addis Ababa.

Elvis, reportedly a father of four, excreted 65 wraps of cocaine, while Christian, 42, excreted 100 wraps of the illegal substance while under observation in the Agency’s custody.

Christian, who reportedly claims to be a businessman, allegedly excreted pellets weighing approximately 2.243 KG, while Elvis allegedly churned out 1.376 KG worth of cocaine in his 65 pellets. Both men have been detained and are being processed for prosecution on drug trafficking and drug abuse charges by the Agency. 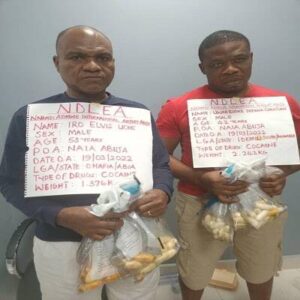 The NDLEA also disclosed that it recently intercepted a shipment of cocaine, cannabis Sativa, methamphetamine, and other hard drugs, packed for export to Ireland, China, Thailand, Australia, and Qatar, through some undisclosed courier companies.

You may recall that we recently published an article to enlighten our youths and warn against the consequences of seeking fast and ill-gotten wealth like this. We spoke about how the quest for quick and easy money keeps ruining many lives daily.

Sadly, though, we may not be seeing the last of such illegal and inordinate thirst for quick money no matter how much collective efforts we all put in to stop or at least curb unethical activities such as these. May God deliver our hearts from evil, Amen!