by Mgbeke Media
in Mgbeke Special
40 0
2

The National Drug Law Enforcement Agency, NDLEA, has declared the suspended Commander of Intelligence Response Team (IRT) at the Force Intelligence Bureau of the Nigerian Police Force, DCP Abba Kyari wanted over his involvement in a 25 kilograms Cocaine deal.

The anti-narcotic agency declared Kyari wanted at a press briefing addressed by its Director of Media and Advocacy, Femi Babafemi at its National Headquarters in Abuja on Monday 14th February 2022. The Agency said it decided after all efforts to get him to honor formal invitations for his interrogation failed. 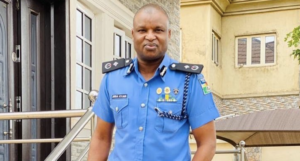 The Agency bemoaned a situation where those who are supposed to support current efforts to stem the tide of illicit drug trafficking neck-deep are themselves neck-deep in the menace.

Part of the text read at the briefing reads: There is no better way to start this press briefing than to remind us about the enormity of the drug problem Nigeria has on its hand and the imperative of all well-meaning Nigerians to play a positive role in curbing the illicit drug menace.

“Even before the damning findings of the 2018 National Drug Use and Health Survey, Nigeria’s drug problem was getting close to epidemic proportion. And if anything, the arrests and seizures by NDLEA in the past 12 months iscountry’scation that the country’s drug problem was grossly underestimated before President Muhammadu Buhari’s resolve to strengthen the NDLEA and the subsequent launch of offensive action by the Agency to clean the society of the menace.

“And in just 12 months, even the most cynical of Nigerians now agree that the country is really in a drug quagmire and therefore appreciates the relentless efforts of NDLEA operatives.

“Unfortunately, some law enforcement agents who should be partners in the pursuit of the President’s mandate are at the forefront of breaking the law, as they aid and abet drug trafficking in the country.

Abba Kyari was mentioned in Hushppupi’s cybercrime and today he has been mentioned in the drug cartel dealings.