The former heavyweight champion punched the man repeatedly after the guy annoyed him, according to eyewitnesses.

Sources close to Mike Tyson claim the man was extremely intoxicated and wouldn’t stop provoking the boxer in his seat. 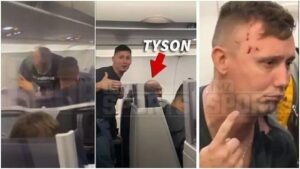 The incident occurred around 10:30 p.m. PT as Tyson was scheduled to fly out of San Francisco International Airport to Florida.

A spokesperson for the Transportation Security Administration (TSA) said that there were no arrests in the incident and that it was a “mutual altercation”.

A witness on the plane told the media that he and his friend were boarding Tyson’s flight and that the boxing legend was initially pleased with him and the other passengers. 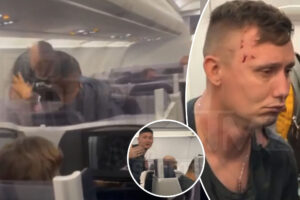 The witness told the entertainment media outlet that Tyson took a selfie with him and was patient with his “overly excited” friend, who attempted to talk with Tyson as he sat behind him.

According to our source, Tyson, 55, was fed up with the man behind him talking in his ear. Tyson told the individual to relax and when he didn’t, the witness said that’s when Tyson began throwing several punches in the man’s face.

There’re two ‘undoctored’ videos obtained from the confrontation.  The first video shows the man trying to talk with Tyson, who was facing the opposite direction. Moments later, the video showed the man hit by Tyson with blood on the side of his head.

A second video shows Tyson standing up from his seat and throwing punches at the guy, who isn’t seen in the clip. The witness said that Tyson walked off the plane seconds after the incident.

The man punched received medical attention and went to the police to address the confrontation, eyewitnesses accounted.

The media agencies concerned about the incident have reached out to the police and JetBlue today, Thursday for a comment but have not received a response yet.

This story was reported from Washington, D.C.