The match between current first and second-placed teams scheduled for Sunday, April 10, 2022, at the Etihad Stadium in the blue side of Manchester, England, looks set to be the title decider for this 2021/2022 Premier League season.

Although both teams have very important UEFA Champions League quarter-finals within the week before the encounter, it’s evident that this clash will be heavy on the minds of both Pep Guardiola and Jurgen Klopp, managers of Manchester City and Liverpool, respectively.

Burnley had started the brightest and had the first goal-scoring opportunity in the 3rd minute of the game, with Wout Weghorst coming close with a header that missed the target by a few inches. 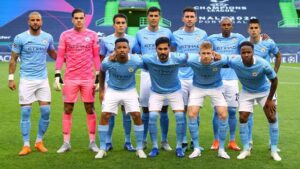 They were made to rue that miss almost immediately, though, as City went up the pitch and, after being set up with a delightful pass inside the opponent’s box, Kevin De Bruyne smashed the ball into the roof of the net and the Citizens were a goal up.

The match result was settled for good with another goal from City in the 25th minute of the first half. Ilkay Gundogan found himself with space inside the Burnley box, and he unleashed an unstoppable first-time shot into the middle of the post to double City’s lead.

There was yet plenty of goal-mouth action for both teams for the remainder of the 90 minutes, but none was able to put the ball in the back of the net again till the encounter ended.

The 2022 Premier League title now seems all set to be decided come Sunday, April 10, 2022, when Manchester City host Liverpool at the Etihad Stadium. Who are you backing to carry the day next Sunday? Please share with us in the comments section.