A Massachusetts public school superintendent has been charged with lying to the FBI after allegedly sending some 99 threatening text messages to a candidate running for police chief.

Lynn Clark, who oversees the school system in the Springfield suburb of Chicopee, used a “burner app” to send the texts from her phone in an attempt to intimidate the unnamed contender into dropping out of the race, according to a criminal complaint unsealed Wednesday in Massachusetts federal court. 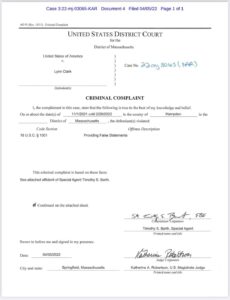 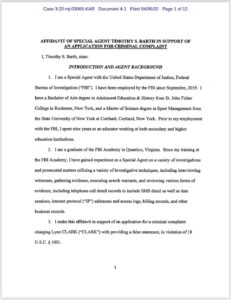 Clark was arrested Wednesday morning at her home in Belchertown, Massachusetts. On Wednesday evening, the Chicopee School Committee voted to put her on indefinite leave and asked her to submit her resignation, NBC10 Boston reported.

The investigation began in December 2021, when Chicopee Mayor John Vieau contacted the FBI and said one of the people under consideration for the chief job had withdrawn their application as a result of threats they had received, the complaint states. 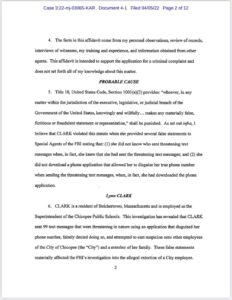 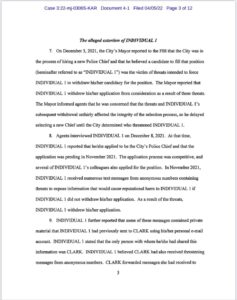 Mayor John Vieau put the process on hold until investigators could determine who was behind the unnerving messages, according to the filing.

There were two candidates in the running who dropped out during the review process: Chicopee PD Capt. Richard Henry and Capt. Donald Strange. Reached at home by The Daily Beast on Wednesday, Strange hung up the phone without commenting. Henry was unable to be reached. Provisional Chief Jeffrey Gawron and retired Chief William Jebb remain in the running. 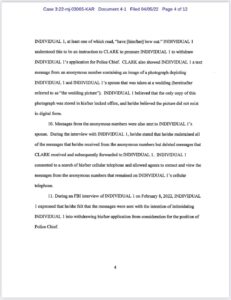 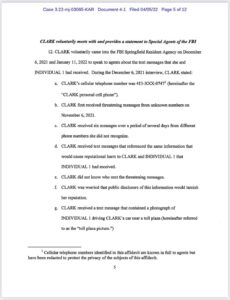 In an interview with FBI agents, the candidate allegedly targeted by Clark said he started receiving the texts last November, shortly after throwing his hat in the ring for the position. The messages came from an anonymous number, and the sender warned that they would “expose information that would cause reputational harm” if the candidate continued vying for the job.

Some of the messages “contained private material” the candidate had previously sent only to Clark from his personal email account, the complaint says.

But the candidate told agents that he thought Clark had also received threatening texts, one of which she forwarded to the candidate, reading, in part, “Have him bow out.”

Clark also showed the candidate a text she claimed to have received with a photo showing the candidate and his wife at a wedding. The picture did not exist in digital form, and had been stored in the candidate’s locked office, the complaint continues. 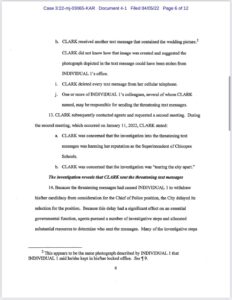 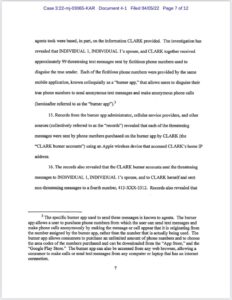 The candidate’s spouse also received threats from anonymous numbers. However, the complaint does not divulge what was in those messages.

FBI agents met twice with Clark, who insisted that she, too, had been targeted with threatening texts. One of them included a photo of Clark driving the police chief candidate’s car, and another contained the wedding photo, according to the complaint. She told agents that she had deleted all of the offending messages, and suggested that one of the candidate’s colleagues may have been responsible, the feds said. 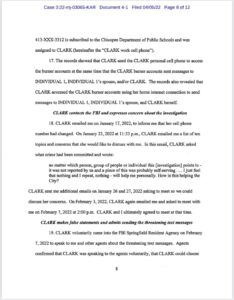 “Clark was concerned that the investigation into the threatening text messages was harming her reputation as Superintendent of Chicopee Schools,” states the complaint.

With the selection process stalled, which the complaint says “had a significant effect on an essential governmental function,” the FBI “allocated substantial resources to determine who sent the messages,” according to the complaint. 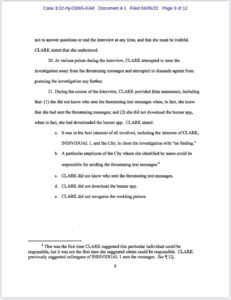 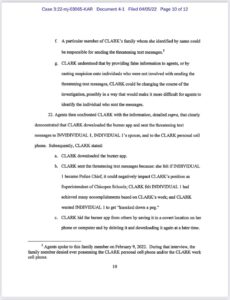 Agents subpoenaed phone records from the company behind the burner app and Clark’s cellular provider, which revealed that each of the threatening texts had been sent from numbers purchased through the app by Clark, the complaint continues. Investigators also found that the texts were sent from an Apple device connected to Clark’s home IP address.

In February, Clark met again with FBI agents and attempted to dissuade them from pursuing the investigation any further, the complaint says.

While continuing to claim she had no idea who sent the messages, Clark allegedly told the agents that it would be “in the best interests of everyone involved…to close the investigation with ‘no finding.’” 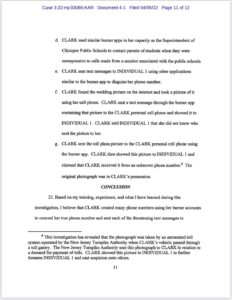 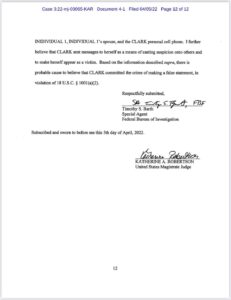 She then blamed the texts on “a particular city employee,” then floated the notion that one of hwn family members “could be responsible,” the docs say.

But agents confronted Clark with the information they had gathered, all pointing to her as the culprit. Backed into a corner, Clark finally confessed, according to the complaint.

Clark admitted to the agents that she sent the texts, explaining that she felt the candidate for chief “had achieved many accomplishments based on Clark’s work, and Clark wanted [the candidate] to get ‘knocked down a peg,’” it states.

She said she had also used similar burner apps to contact students’ parents who were “unresponsive” to calls from numbers associated with the Chicopee Public Schools.

Clark does not have an attorney listed in court records, and The Daily Beast was unable to reach her on Wednesday. In a brief statement to The Daily Beast, Clark’s office said, “At this time, we have no comment.”