Key Points As Nigeria’s Super Eagles Show That What Guinea Can Do, They Can Easily Double!

Key Points As Nigeria’s Super Eagles Show That What Guinea Can Do, They Can Easily Double!

The Nigerian Super Eagles make history today, June 13, 2022, as they recorded their biggest-ever win in an international match during their encounter against the Falcons and True Parrots of São Tomé and Príncipe at the Grand Stade Agadir in Morocco.

A record 10 goals without reply were scored by the very boisterous and rampant Nigerian team, who seemed to only have one thing at the back of their minds from the blast of the whistle signaling the start of the game – to better Guinea Bissau’s scoreline against the Sao Tome team and regain top spot in their qualifying Group A.

It took them only 9 minutes into the first half to get underway, too, as Napoli hitman Victor Osimhen got on the end of a delightful ball from Moses Simon and finished with aplomb.

After having grabbed all three points in a hard-fought victory against the Leone Stars of Sierra Leone, too, last week in Abuja, Nigeria, the Super Eagles now sit comfortably at the top of the table of their 2023 Africa Cup of Nations qualification series with 6 points and an outstanding goals difference.

Before the match in Morocco, the Super Eagles’ Head Coach, Jose Peseiro, had said: “We want to be the team at the top of the table, so we must fight hard against the opponents. For every match, we must commit ourselves fully to winning it.

As I said earlier in the week, Nigeria has a huge pedigree, and they also have both quality and quantity of players. It is important that we select the best all the time to win the big games.”

The Super Eagles completely dominated the Sao Tome Falcons and True Parrots, and here are a few key points that we observed from the match:

(1) Francis Uzoho is a hazard in possession of the ball!

The Super Eagles goalkeeper, Francis Uzoho, has an alarming habit of serving and passing the ball into the middle of the pitch instead of using the options open to him on the flanks. This is always a very dangerous option.

If the team plays against much better opposition that is better technically, this could lead to dangerous situations against his team, as any steal from that spot gives the opponents direct access to bear down on goal!

This needs to be checked by the team’s handlers before Uzoho gets too comfortable doing it and ends up costing the team against a better opponent one day.

(2) Is this Iwobi’s best position on the pitch?

Everton’s Alex Iwobi shone like a bunch of purely refined diamonds in the middle of the pack, and it was a delight to watch.

The midfielder put up a fantastic display in the number 6 position, and he was involved in almost all the goals that the Eagles put past the Falcons during the match.

Although he had to start in that position due to the absence of Rangers FC of Scotland’s midfield talisman, Joe Aribo, Iwobi held his own superbly well and made it look like that spot in midfield is his natural position. 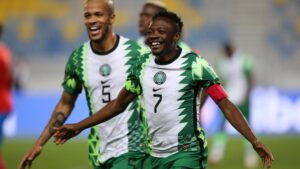 After the disappointment of missing out on the forthcoming Mundial in Qatar later this 2022, the Super Eagles seem to be trying to make amends by ensuring that they wrap up their qualification for the 2023 AFCON tournament.

It is worth noting that they are doing an excellent job at it presently!