Judge Paul Sushchyk, The Massachusetts Associate Of The Probate And Family Court Accused Of Groping A Female Employee, Resigned On Monday.

Probate and Family Court judge who last week was ordered to be suspended without pay resigned from the bench on Monday.

Judge Paul Sushchyk’s resignation letter to Gov. Charlie Baker says in its entirety, “Please be advised that effective March 28, 2022, I hereby resign my office as an Associate Justice of the Probate and Family Court.” 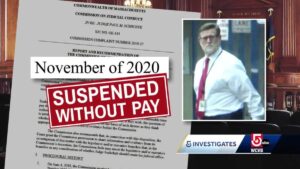 The Supreme Judicial Court said in its March 23 ruling that Sushchyk would be suspended “for a reasonable time” after the Commission on Judicial Conduct concluded he “engaged in an intentional, nonconsensual, and unwelcome touching of a trial court employee while at a court-sponsored event and then provided inconsistent and knowingly false statements during the resulting investigation and hearing.”

The female employee “felt a hand grabbing her left buttock and squeezing it for several seconds” as Sushchyk passed behind her high-top table in a restaurant’s bar area one evening during an April 2019 conference, the SJC’s ruling said.

Sushchyk, a former Sterling police officer, Sterling selectman, and New Hampshire state trooper who served in the U.S. Army Reserves, was nominated to the bench by Baker in January 2018 and unanimously confirmed by the Governor’s Council that same month. 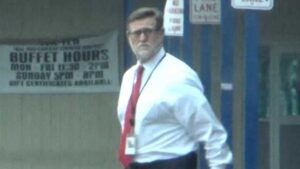 In October 2020, as the Commission on Judicial Conduct weighed a hearing officer’s recommendation that Sushchyk is retired or removed from office, Sushchyk denied any intentional physical contact with his colleague and said in a statement that he had “been reminded that while serving as a judge, I must conduct myself in a manner, at all times, befitting my office, 24 hours a day and seven days a week.”

The judicial conduct commission, according to the SJC, recommended that he be censured publicly, ordered to pay the commission’s costs, and suspended without pay for a “reasonable time to permit the executive and legislative branches to consider if they wish, whether the respondent should retain his judicial office.”

Sushchyk had been removed from judicial duties while the matter was pending. The SJC agreed with the commission’s recommendation that he be suspended without pay but did not call for him to be censured or to repay the commission’s costs.