Pep Guardiola and Manchester City FC of England made a strong case against their “noisy neighbors” moniker in the city of Manchester as they masterfully dispatched Spain’s Atletico Madrid at the Etihad Stadium, Manchester, England, today, April 5, 2022.

City has given themselves a slim advantage in their UEFA Champions League Quarter-Final encounter against the Spanish club, with the 2nd leg match due to hold in Spain, come April 12, 2022.

The match was certainly not a walk in the park for The Citizens, though, as Diego Simeone set up his men to frustrate and break on the counter with speedy players like Joao Felix, Antoinne Griezmann, and Marcos Llorente.

This approach worked and caused problems for City throughout the first half of the match, and it almost worked all through the whole game, too, but for a moment of magical brilliance from substitute Phil Foden.

Guardiola had rung some changes in the 68th minute of the game as he looked for that goal that would give him some control over the next leg in Spain.

City’s first foray up the field after the substitutions saw the ball at the feet of wonder kid, Phoden, who then slotted an inch-perfect pass into Kevin De Bruyne to riffle into the bottom-right corner past a helpless Jan Oblak in goal for Atletico. 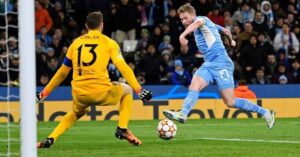 That was to be all the goals in the match eventually. The end-to-end nature of the game had fans and viewers around the world on the edge of their seats all through, and these are two things we observed on the night as the game went on:

(1) City is clearly a footballing project, while United is just a commercial project: When Sir. Alex Ferguson retired from football and left Manchester United in 2012; after winning the club’s 20th Premier League title, many had predicted dark times for United.

No one could have seen the level of deterioration and shameful mediocrity the club has now fallen into, though. Almost nothing on the pitch has gone well since the mighty Scot left, with United only thriving with colossal marketing and sponsorship deals.

Under Guardiola, City has now become what United used to be under Sir. Alex – a well-run, dominating, and efficiently managed football powerhouse! 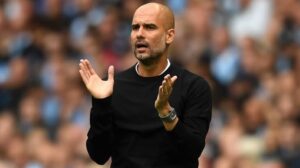 (2) Joao Cancelo is by far the best right-back in the world right now!: From well-placed tackles, brilliant interceptions, confident possession play-outs from the back to a level of poise and ruthless skills akin to top strikers, Cancelo is an absolute beast of a player!

He totally dominated play down the right flank of the pitch, and his marauding play all night was a constant threat and thorn in the flesh of the Atletico defense all game.

The 2nd leg encounter at the Wanda Politano, Madrid, Spain, next week will be highly entertaining and exciting to watch. Atletico now has no choice but to come all out and attack City, and this will most likely leave gaps for The Citizens to exploit in their defensive line.

Who will walk away from this tie with the Semi-Final ticket eventually? Please share with us in the comments section and let us know your predictions.