by Mgbeke Media
in Uncategorized
45 3
14

The police in Imo State on Sunday captured a previous legislative leader of the state, Rochas Okorocha, after a fracas over the Closing down of a hotel belongs to Okorocha’s wife by Imo State Government.

A photo being circulated on WhatsApp showed the former governor sitting along a corridor of a building that looks like a police station.

Mr Okorocha’s aide, Ebere Nzewuji, confirmed to PREMIUM TIMES, Sunday evening that the former governor has been arrested and is detained at the police headquarters in Owerri.

“He has been arrested by the police on the orders of the governor,” Mr Nzewuji said.

Mr Okorocha, a serving senator, is accused of forcefully unsealing his wife’s hotel, Royal Spring Palm Hotel, Owerri, which was sealed two days ago by the commissioner for lands and physical planning on behalf of the Imo State Government.

The commissioner said the hotel was built, without permission, on government land.

But Mr Okorocha’s aide, Mr Nzewuji, denied that the senator tried to unseal the property.

“When he arrived at the premises, they were confronted with thugs who had guns and machetes, and they were attacking him and his entourage.

“He (Okorocha) can’t go there to make trouble, he went to ask questions. A staff member was beaten up, even the hotel’s guests still had their property inside the hotel.

“He wasn’t going to unseal the property,” the aide said.

He said the governor’s aide was backed by the police in the state.

The police spokesperson in Imo State, Ikeokwu Orlando, declined comment on the incident, saying he was yet to be briefed on it.

PREMIUM TIMES could not immediately speak with the Commissioner for Information in the state, Declan Emelumba, as he did not respond to calls and a text message from our reporter.

Since he left office as governor in 2019, Mr Okorocha has been having a political battle with his successor, Governor Hope Uzodinma. Both men are members of Nigeria’s ruling party, APC.

A man, covered with blood in one of the photos, has been identified as Mr Okorocha’s police orderly. 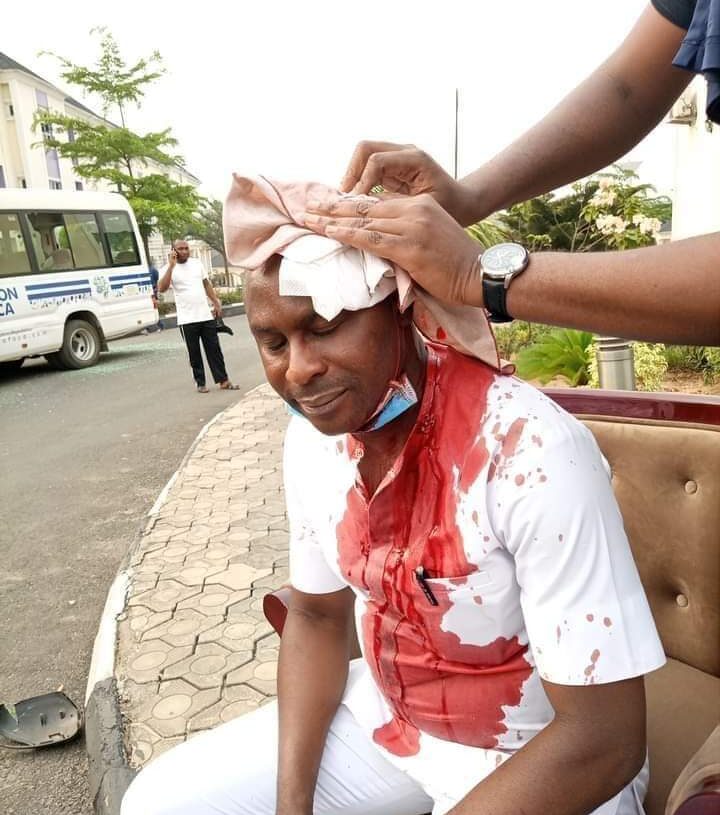 The man covered in blood above, Mr Okorocha’s aide, Mr Nzewuji, said the feud between the senator and Governor Uzodinma is all about “political vendetta and witch hunt” by the latter.

It is all about political vendetta and witch hunt which is not far from the 2023 presidential election.

“Senator Okorocha is seen as the brightest star to come from this part of the country, and some people outside the region are using his brothers there to embarrass him,” he said.

Mr Nzewuji called on President Muhammadu Buhari and political leaders in the country to intervene in the feud between Mr Okorocha and Governor Uzodinma.