Cristiano Ronaldo has announced the death of his baby boy.

The Manchester United star was expecting twins with partner Georgina Rodriguez, but revealed on Monday that while she had given birth to a girl, their son had died.

‘It is with our deepest sadness we have to announce that our baby boy has passed away,’ Ronaldo began his statement.

‘It is the greatest pain that any parent can feel.’

The footballer continued: ‘Only the birth of our baby girl gives us the strength to live this moment with some hope and happiness.

‘We would like to thank the doctors and nurses for all their expert care and support. We are all devastated at this loss and we kindly ask for privacy at this very difficult time.’

He added: ‘Our baby boy, you are our angel. We will always love you.’ 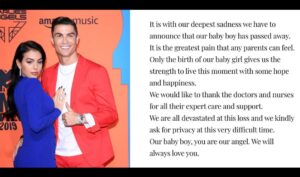 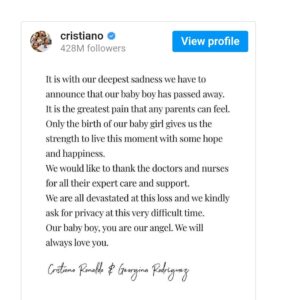 Ronaldo and Rodriguez revealed they were expecting again in October 2021.

He shares daughter Alana, three, with Georgina and also has son Cristiano Jnr, 11, and twins Eva and Mateo, four, via unknown surrogates in the United States.

In December, the couple shared footage from their gender reveal with pink and blue balloons to confirm they were having a boy and a girl.

‘Where life begins and love never ends ❤️❤️❤️❤️❤️❤️ #blessed,’ the pair captioned their Instagram posts at the time.

In their pregnancy announcement, the Portuguese footballer told his followers: ‘Delighted to announce we are expecting twins👶🏻👶🏻. Our hearts are full of love – we can’t wait to meet you ❤️🏠.’

Rodriguez kept her pregnancy mostly under wrap but did share a sweet photo of her getting a baby scan where she was accompanied by the couple’s children.

She captioned the photo: ‘Impacientes ❤️ ❤️,’ which translates to ‘impatient’ showing just how excited their kids were to meet the twins.
Ronaldo and Rodriguez have been dating since 2016 when they met at the Gucci store where she worked as a sales assistant. 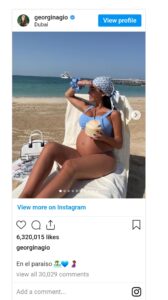 Recalling the early days of their relationship, Rodriguez previously revealed to Italy’s Elle magazine: ‘Days later we saw each other again at another brand’s event.

‘It was then that we could talk in a relaxed atmosphere, outside of my work environment. It was love at first sight for both.’

Over the years, it has been rumored that they were engaged but she denied the speculation in 2019. 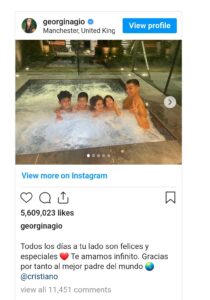 Speaking to Spain’s Hola! Magazine, she said: ‘Every couple wants to get married and I would love to personally.

‘Right now we have priorities and a lot of responsibilities, although in the future it would be marvelous to become Cristiano’s wife.’