The Los Angeles Police Department confirms that Chris Rock has “declined to file a police report” following an altercation with Will Smith at the 94th Academy Awards. Smith took to the stage during the 2022 Oscars and slapped Rock after the comedian made a joke about Jada Pinkett Smith. 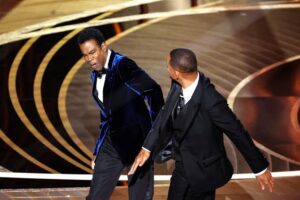 While presenting the best documentary feature at the Oscars, Rock made a joke about Pinkett Smith’s shaved head by comparing it to the look of Demi Moore in the 1997 movie “G.I. Jane.” Rock said he couldn’t wait to see Pinkett Smith, who has alopecia, star in “G.I. Jane 2,” which led Smith to go up on stage and slap Rock. Smith returned to his seat and shouted, “Keep my wife’s name out of your fucking mouth!”

Smith won the best actor for “King Richard” following the incident and issued an apology in his tearful acceptance speech. The actor said, “I want to apologize to the Academy. I want to apologize to all my fellow nominees. This is a beautiful moment and I’m not crying for winning an award. It’s not about winning an award for me. It’s about being able to shine a light on all of the people.” 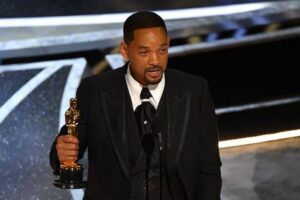 In between the slap and his best actor win, Smith met with Denzel Washington. The “Glory” and “Training Day” Oscar winner offered Smith the following advice: “At your highest moment, be careful, that’s when the devil comes for you.”

Pinkett Smith announced last year she shaved her head after struggling with alopecia. After Rock made his “G.I. Jane” joke, Jada was seen not laughing and rolling her eyes. The actor wrote on Instagram last year, “Now at this point, I can only laugh… y’all know I’ve been struggling with alopecia…Mama’s gonna have to take it down to the scalp so nobody thinks she got brain surgery or something. I and this alopecia are going to be friends … period!”