Chicopee Schools Superintendent Lynn Clark leaves the U.S. District Court in Springfield after her arrest on charges of lying to FBI. (Don Treeger / The Republican) 4/6/2022

According to a news release sent to the media |press from the Department of Justice in Boston, 51-year-old Lynn Clark of Belchertown allegedly sent 99 threatening messages using fake phone numbers purchased in an app to an applicant for Chicopee Police Chief.

The victim started receiving threatening text messages that would cause reputational harm after submitting their application in November 2021. Because of the threats, the victim withdrew their application and the City of Chicopee delayed the selection process. 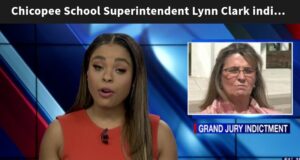 Police received a report that a candidate was receiving threats on December 3, 2021. The charging documents indicate around December 6, 2021, Clark falsely stated to federal agents that she received threatening text messages from unknown phone numbers, when, in fact, she sent the messages to herself. Around February 7, 2022, she allegedly again falsely stated to federal agents she did not know who sent the messages and denied she downloaded an app to purchase fake phone numbers to send the messages.

Clark allegedly suggested that the messages could have been sent by other Chicopee city employees, the victim’s colleagues, and a member of Clark’s own family. Clark later admitted that she was the one who sent the messages.

According to a complaint, Clark sent the messages because she felt if the candidate was hired as the chief, it would negatively impact her position as superintendent of Chicopee public schools.

Clark was arrested and charged on April 6 with two counts of making false statements and placed on paid administrative leave by the Chicopee School Committee.

Clark faces up to five years in prison, up to one of supervised release, and a fine of up to $10,000 for each charge. She is scheduled in federal court in Springfield on April 27.

Our Media team reached out to Chicopee Mayor John Vieau for a comment on the proceedings. He had been the one to contact the FBI back in December of 2021.

He refused to comment, though he assured the media that he will release a statement soon.