Portuguese and Manchester United of England midfield maestro Bruno Fernandes marked his vastly improved new contract at the club with another drab draw against Leicester City on Saturday, April 2, 2022.

But for the intervention of VAR, United would have lost the match altogether after James Maddison fired past David De Gea to restore Leicester’s lead on the night, only for the goal to be chalked off for a foul on Raphael Varane in the build-up.

United was without any notable center forward for the match played at their iconic Old Trafford stadium. Iconic Portugûese superstar Cristiano Ronaldo (illness) and Uruguay hitman Edinson Cavani (calf injury) missed the encounter. It was pretty evident that United was very disjointed up front without them.

Starting the match in the false 9 position alongside French midfield dynamo Paul Pogba, Bruno Fernandes gave his all to ensure that the Red Devils bagged all 3 points. Still, United was without any natural cutting edge. They have now failed to beat Leicester City in the last four encounters.

This draw also means that the chances of United making the top 4 again this season have been extinguished now, as they currently sit in the 6th position on the 2022 Premier League table.

Nigerian international Kelechi Iheanacho had put the visitors in front in the 63rd minute. Still, they were pegged back almost immediately as Fred was quickest to a rebound in the Leicester box and slammed home from close range to bring United level in the 66th minute. 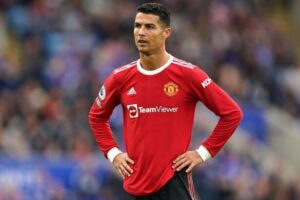 Sadly for Bruno Fernandes, Manchester United, and all her fans, the match ended in that 1-1 scoreline. Their next stop in the league is a match away to Everton FC at Goodison Park, England, and we’re sure they would kill to have Ronaldo back and firing by then.