Peter Obi has emerged as the sole Presidential Candidate for Labor Party (LP) after Prof. Pat Utomi, Mrs. Moghalu, and others consented to step down and adopt him as the party’s flag bearer.

Recall that the former Anambra State governor had withdrawn his candidacy from the People’s Democratic Party (PDP) before their presidential primaries were held last week.

He has now secured the ticket to run for the nation’s highest office on the platform of one of the country’s strongest political parties after the ruling APC and the PDP. 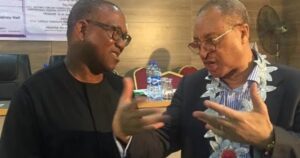