“ASUU Must Come Off Their High Horse If They Want Strike To End” – Dr. Chris Ngige

“ASUU Must Come Off Their High Horse If They Want Strike To End” – Dr. Chris Ngige

Nigeria’s Honorable Minister of Labour and Employment, Dr. Chris Ngige, has reportedly stated that the Academic Staff Union of Universities in Nigeria (ASUU) must quit grandstanding if they want the current industrial strike action to end.

The Minister reportedly stated today, April 22, 2022, that only the Union could only make the final decision to call off this current industrial strike action.

Dr. Ngige urged the Union members to be considerate and hoped that they would make the best decision in the interest of Nigerian students.

While calling on members of the union to be considerate, the presidential aspirant urged ASUU to reconsider its stance for further deliberations.

Regarding when the outstanding issues could be resolved, he said: “It depends on ASUU. The ball is in their court. They should go and meet the Benimi Briggs Committee and look at what the committee is doing and make further inputs so that the work can be accelerated.”

You may recall that Dr. Ngige recently declared his ambition to run for the Nigerian presidency. He addressed the ASUU impasse while speaking on Channel’s TV program, “Politics Today.” 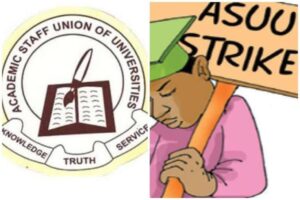 “ASUU has to come down from their high horse. You cannot go and start intimidating people in NITDA and threatening the Minister of Digital Economy and Communication with revocation of his professorship that he is a fake professor,” the Minister stated.

He concluded by also saying: “You go to ABU and say you will withdraw the certificate of the director of NITDA. That’s bullying. It is not allowed in labor negotiations.”

We hope these people involved can put aside their egos and whatever personal interests and agendas they may be secretly pushing and think about the welfare and good of the common Nigerian students for once!