The Citizens are not due to play till 3 pm (Nigerian time) today, and they would surely be under a bit of pressure to regain the top spot after the Merseysiders leapfrogged them to take pole position on the log table.

Watford’s Juraj Kucka had come close to putting the visitors in the lead with a low rasping drive to the bottom-left corner of the Liverpool goal, but Brazilian goalkeeper Alisson well saved the ball.

The resulting ball recovery saw Liverpool launch a blistering counterattack, and that move yielded the only goal that separated the sides at halftime. The home side was reduced to just two shots on target during the first half, though, so they came out all guns blazing in the second half. 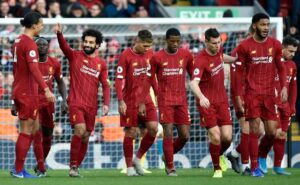 The first glorious chance in the second half fell to Watford’s Joao Pedro, who put the ball wide with the goal at his feet after being put clean through in the 57th minute.

Two minutes later, goal scorer, Jota was found by another beautiful ball into the box from a set-piece, but he also put his header inches above the crossbar. Liverpool manager Jurgen Klopp started calling on reinforcements from the 62nd minute. Fabinho, Sadio Mane, and Luiz Dias all entered the fray, but Watford stood resolute and refused to concede.

It looked like the match was destined to end with just one goal separating the sides, but with barely two minutes to regulation time, Kucka inexplicably wrestled Jota to the ground in the box while defending a corner kick. Referee Stuart Attwell didn’t see it, but VAR did, and after a short review, a penalty kick was deservedly given.

Up stepped Brazilian midfielder Fabinho who expertly dispatched into the top-right corner. 2-0 Liverpool, and the game was effectively over in the 89th minute.

It was a very tense atmosphere at Anfield, with some exhilarating end-to-end footballing action till the end of the match. Now, all eyes turn to Manchester City in a few minutes as they seek to reclaim the top spot. Will they be able to overcome relegation-bound Burnley? We will see you shortly.