‘A very good day’: Rachael Rollins sworn in as US attorney for Massachusetts

Rachael Rollins made history on Monday the 17th of January, 2022, becoming the first Black woman to serve as United States attorney for Massachusetts.

Rollins, who stepped down as Suffolk district attorney last week, was sworn in as the state’s top federal prosecutor by US District Chief Judge F. Dennis Saylor IV during a small, private ceremony at the federal courthouse in Boston.

A formal ceremony will be held at a later date.
On Twitter, Rollins noted that she took office on her father’s birthday, tweeting: “Happy Birthday Dad. Your present is waiting at the Moakley Courthouse. Love you.” 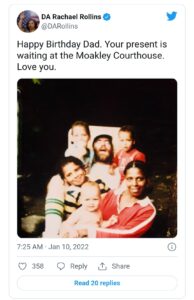 In a statement, Rollins, 50, of Boston, said it was “a proud and humbling moment” for her and her family. It was particularly special having her parents with her, she said.

“Their support has been unwavering, and I owe so much of this moment to them,” Rollins said. “As I reflect upon the path that led me here, I cannot help but think about the many colleagues and mentors who have supported me along the way.”

She thanked her friends, colleagues, and law enforcement partners at the Suffolk district attorney’s office and said she was enormously proud of what they had accomplished together.

“As I begin this next chapter as the United States Attorney, I look forward to the challenges ahead,” Rollins said. “There is much to be done and I am blessed to be walking into an office with highly skilled attorneys and staff who have the same commitment to public safety and community well-being and health.” 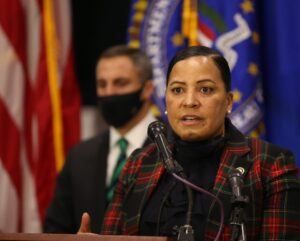 US Senator Edward Markey, who had lobbied for Rollins’s appointment, posted on Twitter that it was “a very good day,” saying Rollins “carries with her a powerful record of transforming criminal justice systems so that they deliver true justice.” 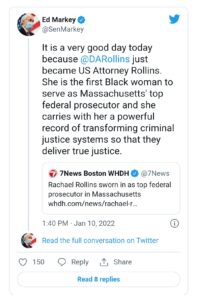 Rollins, a former federal prosecutor who as district attorney oversaw a number of progressive reforms, was nominated by President Biden in July and faced a contentious, partisan battle in the Senate. She was narrowly confirmed last month, with all Republicans voting against her and Vice President Kamala Harris casting the tie-breaking vote.

After her confirmation, Rollins said she has dedicated much of her career to public service and that “leading the US attorney’s office is a profound honor, and I pledge to serve with continued zeal and passion for justice.”

She will lead a team of more than 250 prosecutors and staff, with offices in Boston, Worcester, and Springfield.

“The Suffolk County District Attorney’s Office is staffed with exceptional attorneys and non-lawyers who are dedicated to justice and nurturing safe communities. That will not change with my administration,’’ Hayden said.