A Memphis woman is facing a slew of charges after attacking an officer as she tried to escape from police custody, authorities say.

According to police, 38-year-old Daytona Smith exposed an officer to HIV after she bit him in the arm. Smith was charged with aggravated assault, resisting arrest, drug possession, and criminal exposure to HIV. 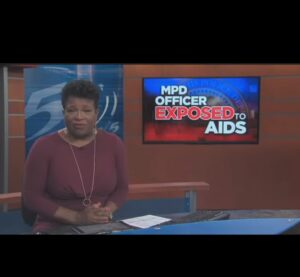 The incident occurred after Smith was arrested during a traffic stop because she was driving with expired tags, a suspended license, and no proof of insurance. Officers recovered marijuana, crack, and cocaine from her car following a search.

She was placed in custody. However, she began banging on the patrol car’s windows, asking to use the bathroom. As the officers prepared to escort her into the restroom, she tried to run away.

Officers chased after her and tackled her to the ground. Smith kept resisting, and bit one officer on the arm, breaking his skin.

According to a police report, Smith told medical professionals that she was HIV positive.

The officer was taken to the hospital, where he received treatment and was released.