A jury on Tuesday ruled against Bill Cosby in a civil lawsuit brought against him by a woman who said he sexually assaulted her at the Playboy Mansion in 1975 when she was 16.

Judy Huth testified that Cosby molested her. She accused him of trying to put his hand down her tight pants and exposing himself before he forced her to touch him sexually on a bed in a “blue room,” which she said was adjacent to the game room at the mansion.

Huth, now 64, testified that Cosby kept pursuing her after she told him that she was “15 or 16” years old. She claims to have told Cosby that she was on her menstrual cycle — even though she was not — in hopes that he would stop.

“I was trying to deflect,” she said. “But he didn’t stop. I just closed my eyes. … It was so fast. Maybe five minutes. Quick.”

The trial represents one of the last remaining legal claims against Cosby after his Pennsylvania criminal conviction was thrown out by an appeals court last year. The 84-year-old actor did not attend the trial and did not testify.

During closing arguments, a lawyer for Bill Cosby told jurors they need to look past years of public accusations against him and consider only the evidence presented by Huth.

Cosby’s defense team has focused on calling Huth a liar because she has changed the timeline of the story. In a 2014 lawsuit, she said the assault took place in 1973 or 1974. But before the trial began, Huth and her attorneys said that further investigation of the evidence allowed them to determine that it happened in the spring of 1975. 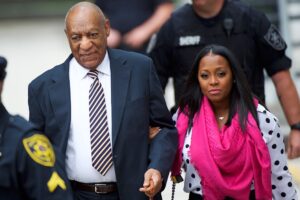 “Can you imagine how hard it is to defend a case when you start with the label of f sexual predator?” Bonjean told the jurors, reminding them they were chosen because they promised they would be able to consider only the facts presented in court. “If we were just going to try people based on labels, then why have trials at all?” 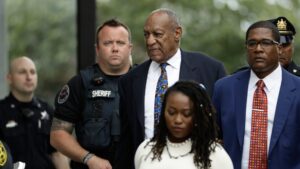 Huth’s attorney Nathan Goldberg told the jury that “my client deserves to have Mr. Cosby held accountable for what he did.”

“Each of you knows in your heart that Mr. Cosby sexually assaulted Miss Huth,” Goldberg said.