Abba Kyari is an enigma. A detective who craves the limelight. A replica of James Bond with the guns and guts, but without the women and drinks, perhaps. Someone said Abba would have solved Funso Williams and Bola Ige. When a hard nut falls on our head, we look to Abba Kyari and his team to crack it. I must confess, after solving the billionaire kidnapper Evans and helping to diagnose the Unknown Gunmen in the southeast, I will remain eternally grateful to Abba Kyari. My soul weeps.These are not great times for the super cop. 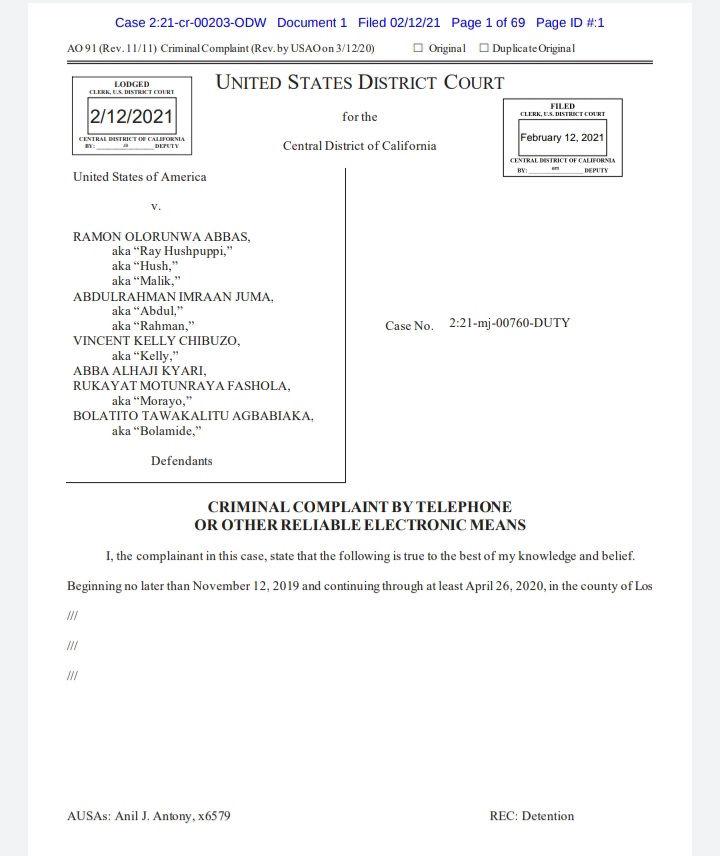 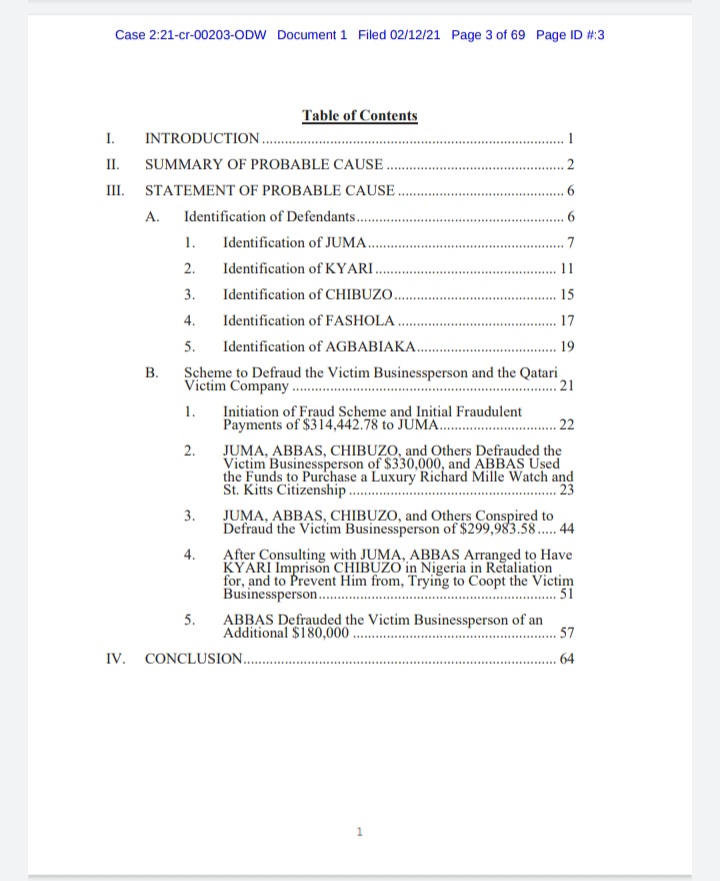 A certain Ramon Abbas, alias HushPuppi, who lived more flamboyantly than any Saudi Sheikh while fleecing businesses and persons of hundreds of millions dollars in wire fraud, has been spilling the beans. Now singing like a canary and rolling on the floor for the FBI, hoping for leniency in a plea bargain, Hushpuppi has roped in the great Abba Kyari. Well, the noose on Abba Kyari’s professional neck could be the string of details in Hushpuppi’s mobile phone. 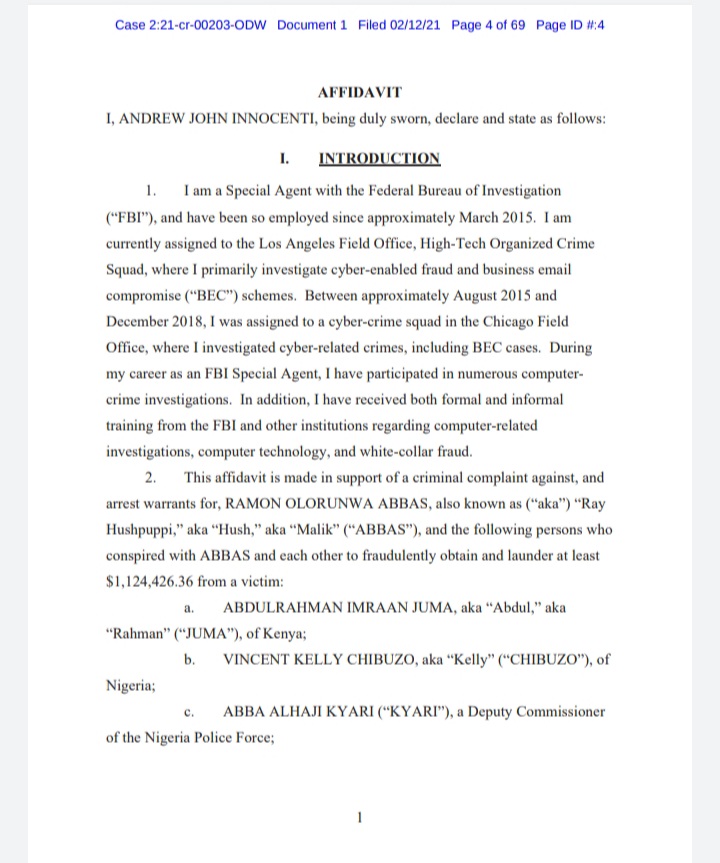 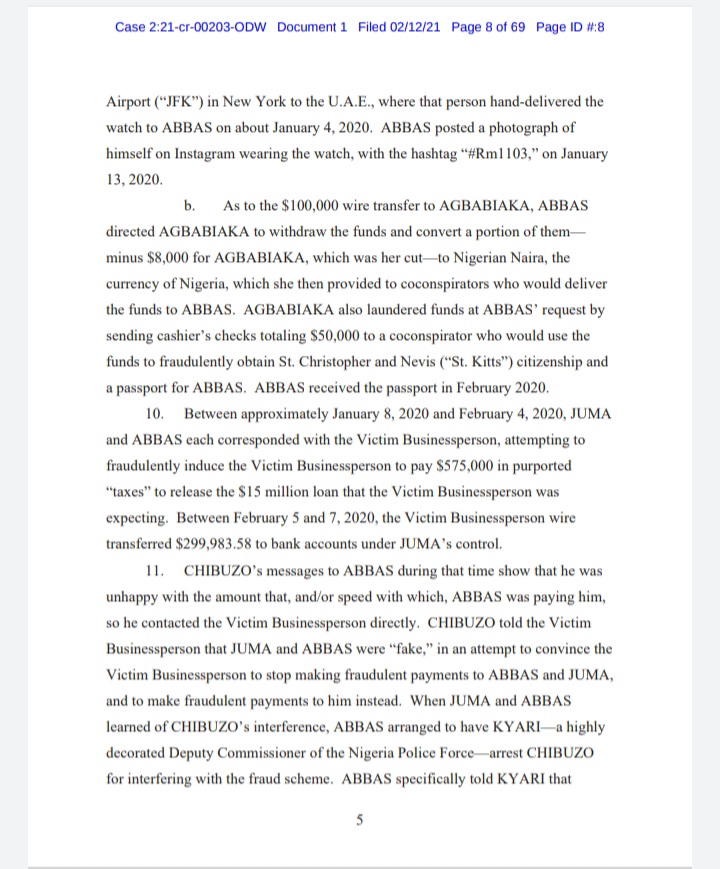 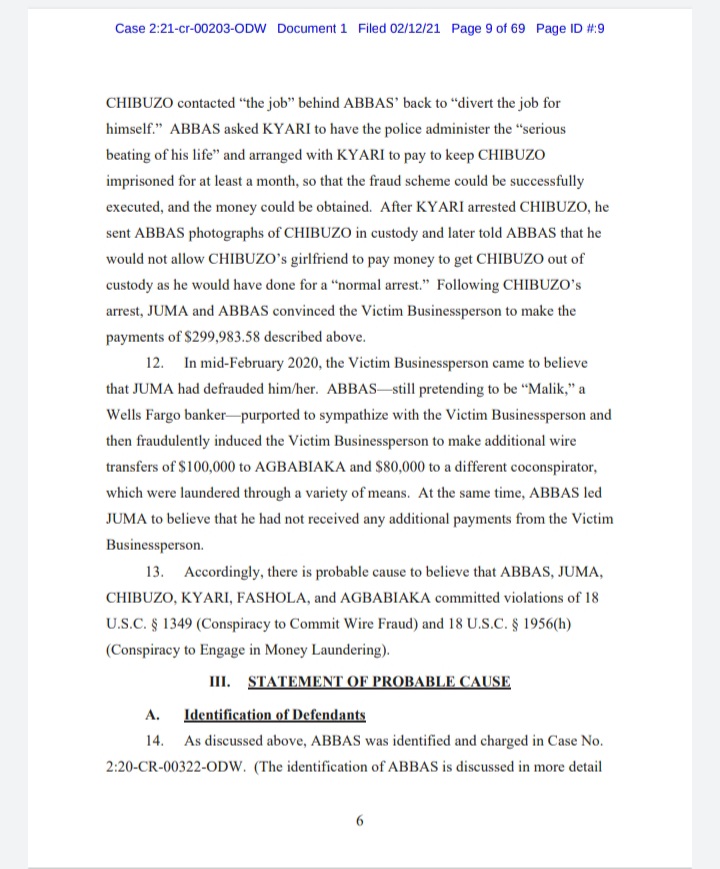 Abba Kyari has dismissed the allegations. But his response hasn’t been as professional as his handling of the elusiveness of  Kidnapper Wadume. Rather than confront the issues, he has taken a page from politicians’ playbook and moaned about haters, sensationalism and fake news. Abba Kyari said the money linked to him was N300,000. He said Hushpuppi, who lived vanity and exhibitionism on Instagram, had liked his dress and sought his tailor. So the money was paid to the tailor for five dresses for   Hushpuppi. That story sounded reasonable until the court documents revealed the extent of the rot. 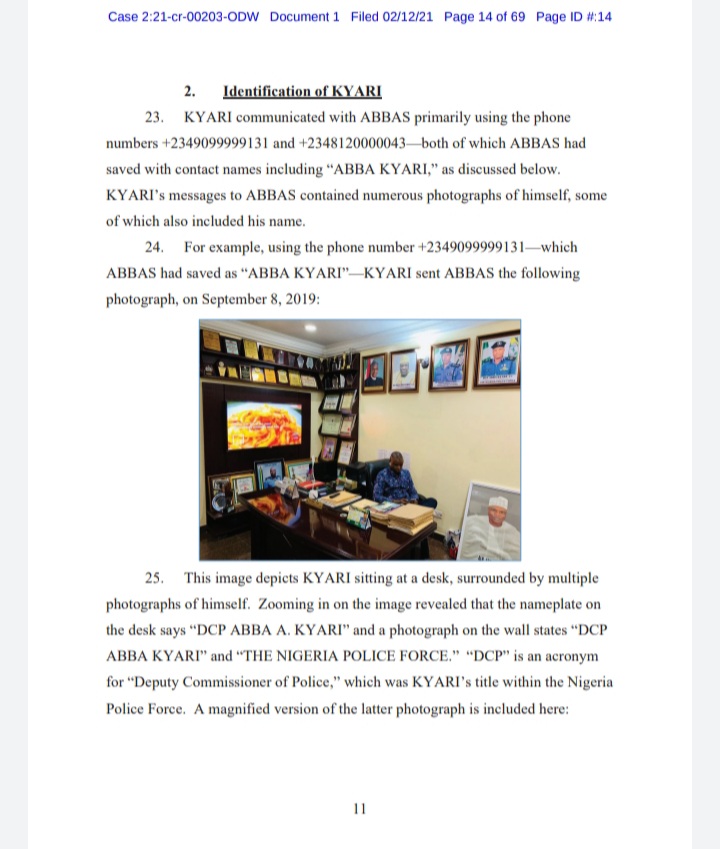 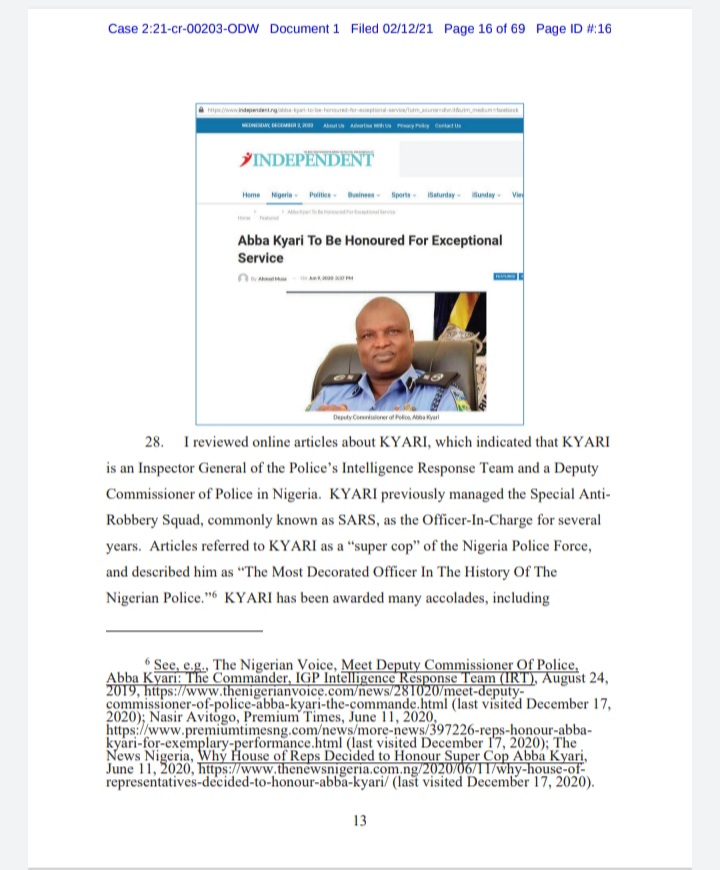 Abba Kyari’s involvement in the Hushpuppi Mugu processing factor, though tangential, is damning.  In 2019, Abba Kyari travelled to Dubai. On that trip, he met Hushpuppi. Huspuppi gave him milk in a car and a chauffeur. In 2019, every child in Nigeria knew that Hushpuppi lived a questionable life. But Hushpuppi also hosted a few politicians. Between then and 2020, when the shit hit the fan, Abba Kayri shared personal pictures and professional attainments with Hushpuppi, and Hushpuppi thanked God for bringing Abba his way. 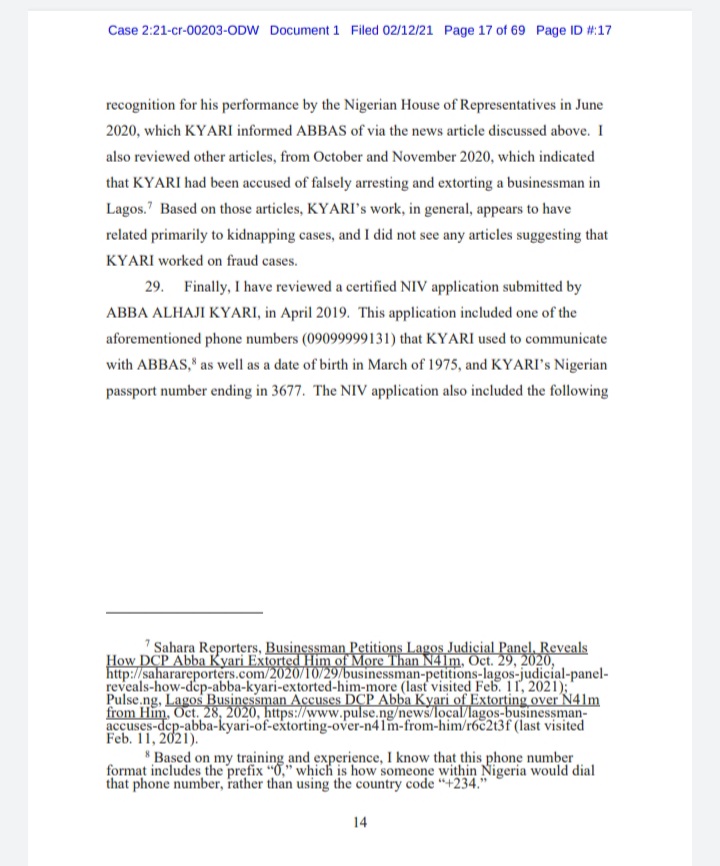 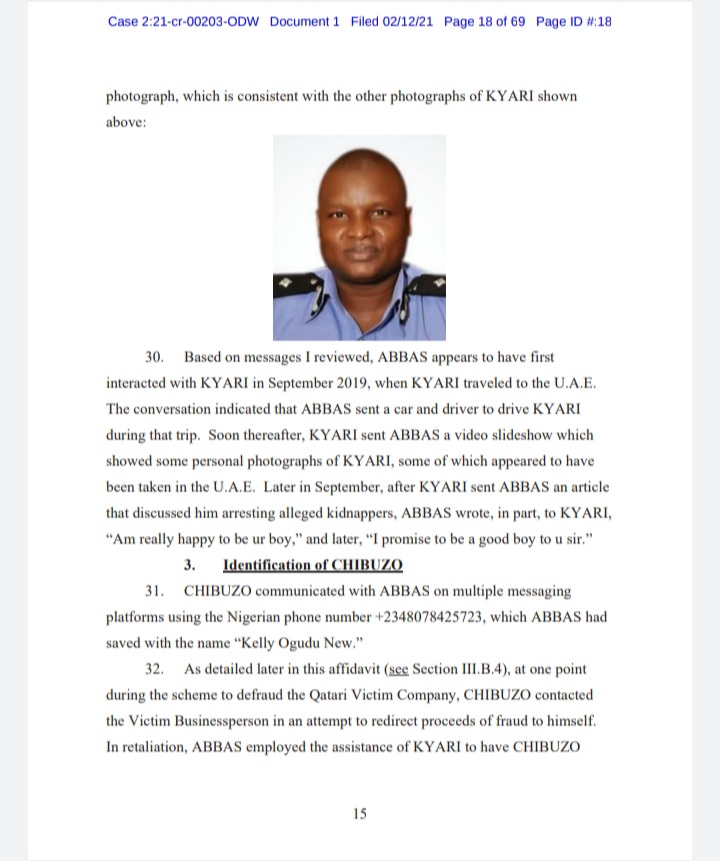 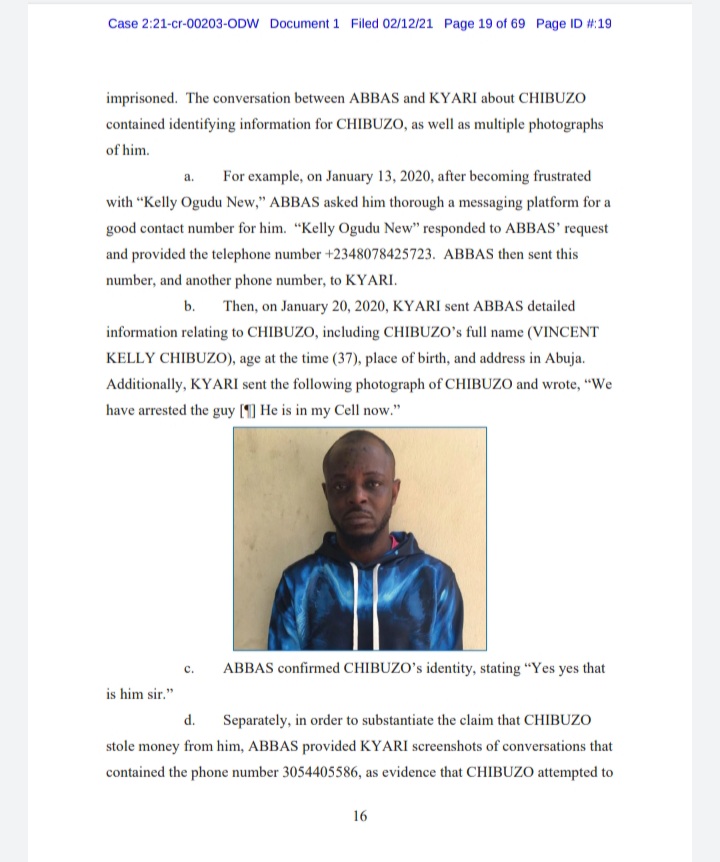 In February 2020, Hushpuppi called on his friend, Abba. A certain Vincent Chibuzo was on the verge of diverting a Qatari mugu and fraud money away from Hushpuppi. Vincent Chibuzo had helped Hushpuppi create a dodgy website to expedite the fleecing of the Qatari. Vincent had felt cheated by Hushpuppi and decided to let the man know Hushpuppi was a fraudster and hijack the scheme. Hushpuppi, it would appear, hired Abba Kyari to take Vincent out of circulation for a while. Long enough to enable Hushpuppi milk his victim in some peace. 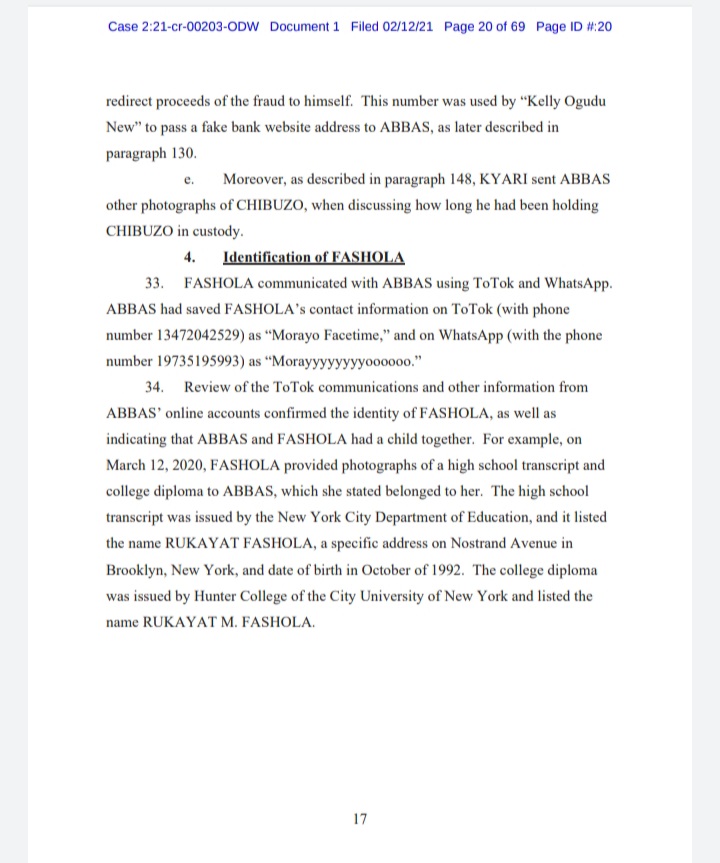 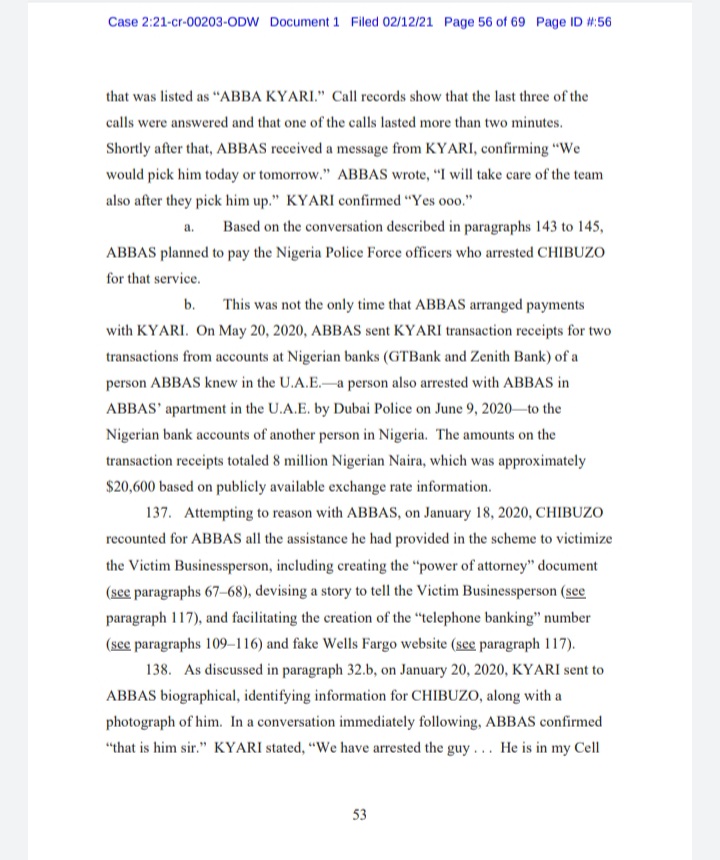 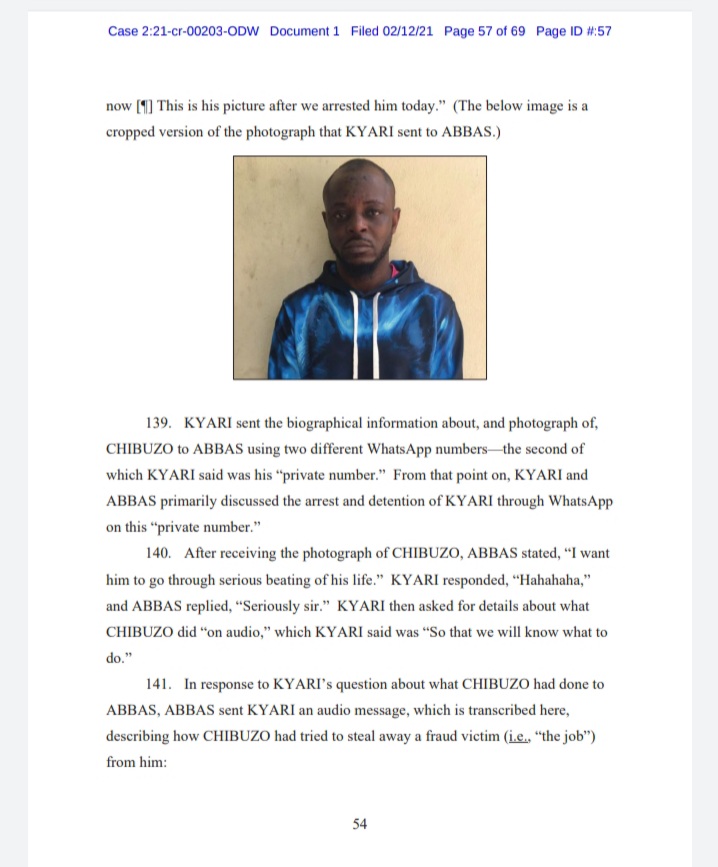 Abba could claim ignorance of Huspuppi’s motive, but if he does, he can’t explain why he kept Vincent in a cell for a month as requested by Hushpuppi. The top dog had become Huspuppi’s lapdog. The dirty details didn’t end there. A   month after sidelining Vincent for Hushpuppi, Abba Kyari informed Hushpuppi he had made a Job out of Vincent Chibuzo. He sent him a picture of Vincent ravaged by skin lesions. The super cop was seeking the empathy of a super-criminal to release his bruised prey. 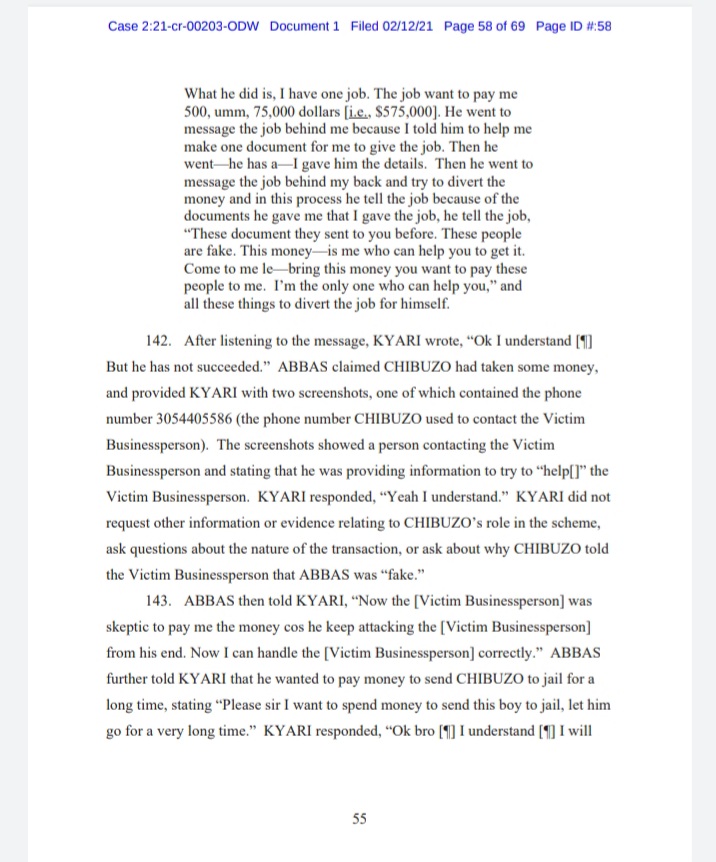 Abba Kyari could claim he was investigating the purported death threats made against Hushpuppi’s family by Vincent. That’s a nice alibi. But how would he explain his typed response to this piece of comedy? When Vincent was in Abba’s cell, Vincent’s girlfriend was made to believe the sum of N1,000,000 could buy Vincent freedom. So the poor but devoted girl ran from pillar to post, trying to raise the ransom. Because Vincent probably didn’t know who the complainant was, his girlfriend took her fund-raising effort to Hushpuppi. Hush didn’t hush her. He promised to contribute 100,000 naira. When Hushpuppi relayed to Abba Kyari the story, Abba responded by saying that the girl thought it was a “normal arrest” which money could solve. In one sentence, Abba removed the veil of ignorance. 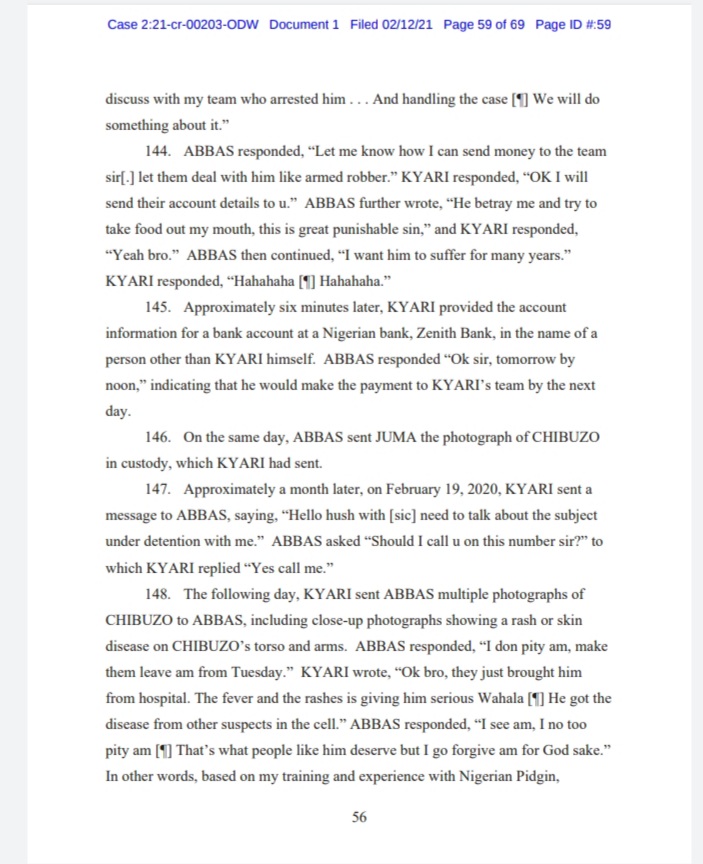 I want all terrible eggs culled from the police force. But I will mourn the fall of Abba Kyari. When Vincent was to be released, Hushpuppi made another request. He wanted Vincent Chibuzo’s gadgets confiscated permanently. Abba Kyari acceded to this request in a text and knotted the noose of conspiracy around his neck. Sequestered Vincent was to be released, Hushpupi wanted him wiped clean off all strings to the Qatari cash cow. 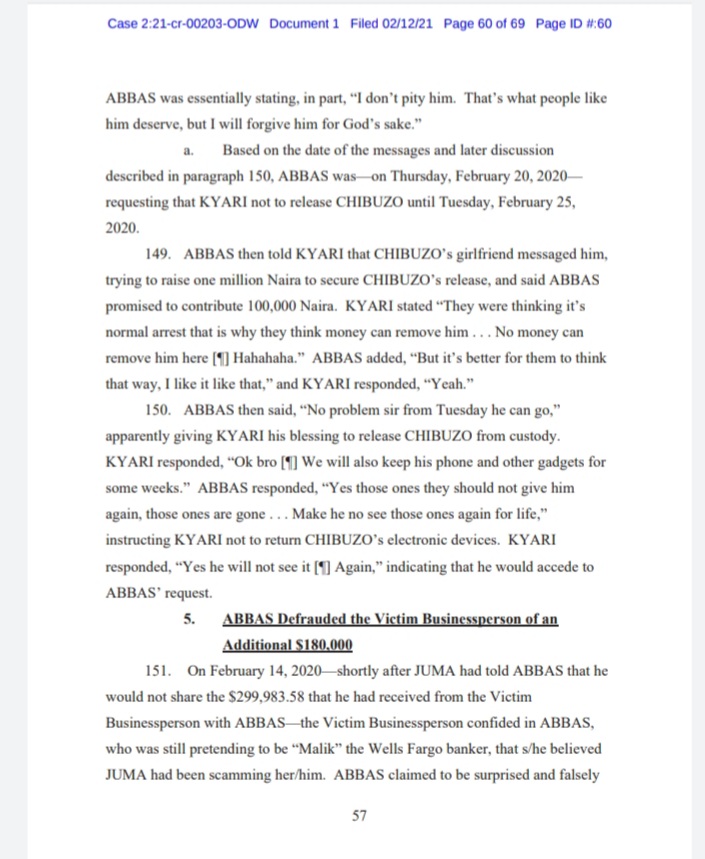 Money is the root of all evil. I agree. Otherwise, why would a man who has taken more risks than most others to combat violent criminals succumb so cheaply to the enticement of a naked rogue? The dalliance between Nigerian police officers and cybercriminals necessitated the birth of the EFCC. 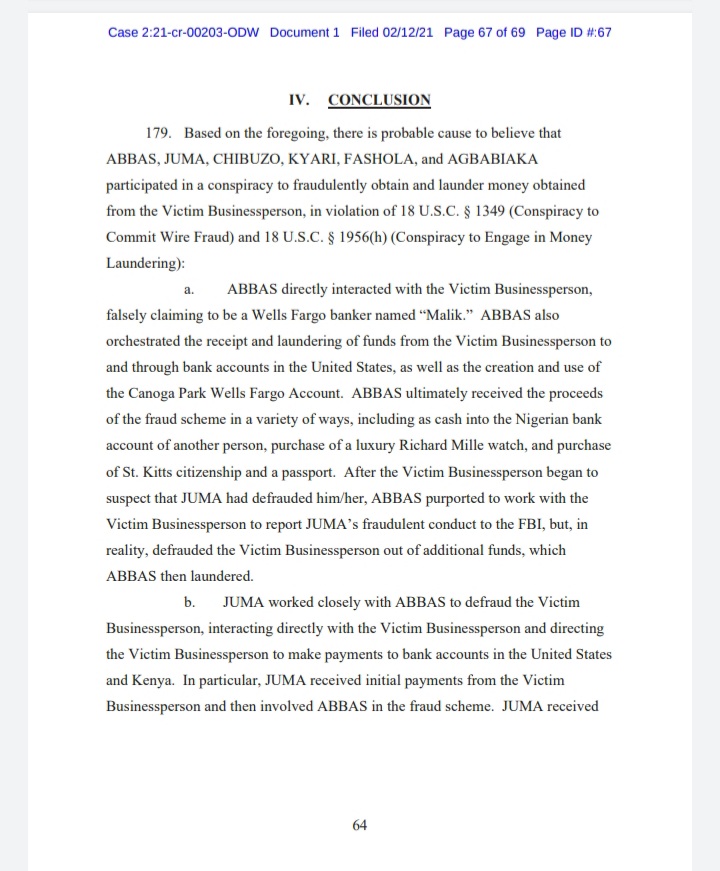 Hushpuppi let Abba Kyari in on the nature of the business. On every occasion, Abba replied tersely. And when Hushpuppi sounded a little cryptic, Abba Kyari avoided asking questions. But one question he asked has left him naked. He asked Hushpuppi to detail his involvement with Vincent Chibuzo so that he would know how to handle the suspect. So Hushpuppi told him the details of the “job” and, with a heavy dose of indignation, relayed how Vincent Chibuzo wanted to mess things up. 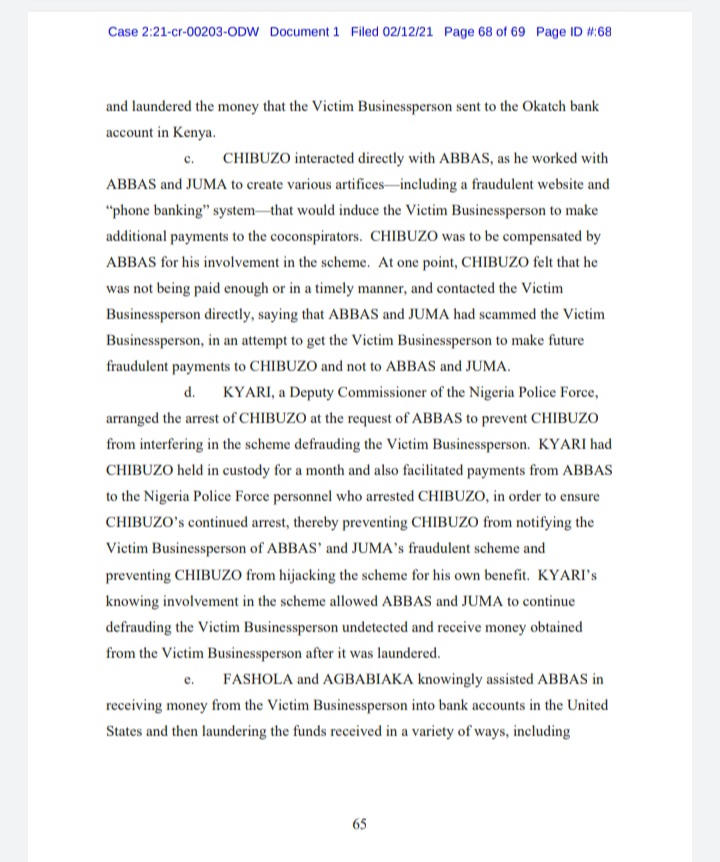 The Nigerian police have commenced an investigation. Cavorting with celebrity rogues could be deemed poor judgment. But a senior police officer, working for a rogue, helping him outwit his victims, is diabolical. While Vincent Chibuzo was in the cell, Huspuppi and his accomplices collected a few more hundreds of thousands of dollars from the Qatari prey they had in their net. Perhaps, some elements in the police share the sentiment of a popular Nigerian musical artiste who once justified cybercrime as repatriation. Otherwise, why do people who treat armed robbery and kidnapping with disgust attend to established cybercriminals with indifference and occasionally loving affection?

Abba Kyari had shone like a million stars. He delivered difficult results. He has enemies within and without the police. But he has more fans than haters. He has alluded to naysayers and envy. I don’t think this problem is the handiwork of witches and wizards. 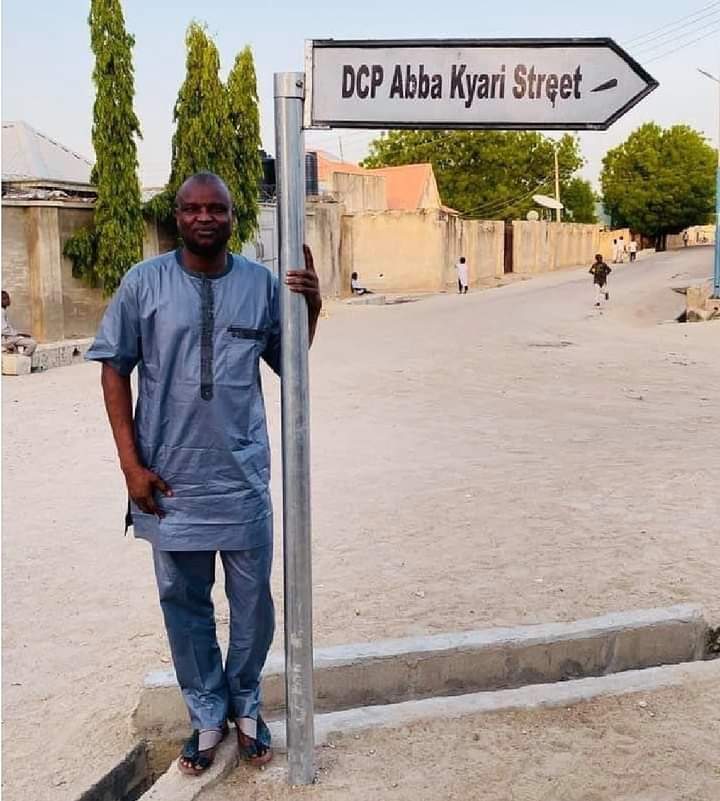 My prayers are with him. His positive exploits will never be forgotten. But he must confront this matter with courage and honesty. We never thought he was a saint. He was bolder and more methodical than most others. We knew SARs officers did some of these things. We had built heroes and excused their warts. I had prayed for him as I had prayed for Usain Bolt against doping. We will wait for the results of the investigations.
#PROFMGBEKE